Story Links BIRMINGHAM, Ala. – The roadmap for an unprecedented 50th Southeastern Conference regular-season championship has officially taken shape with the announcement of the 2021-22 home-and-away designations for the entire league’s schedule. On Monday, the SEC announced assignments for all 14-member institutions, including revealing the […]


BIRMINGHAM, Ala. – The roadmap for an unprecedented 50th Southeastern Conference regular-season championship has officially taken shape with the announcement of the 2021-22 home-and-away designations for the entire league’s schedule. On Monday, the SEC announced assignments for all 14-member institutions, including revealing the home-and-away opponents for each team.

As announced prior to the 2015-16 season, Kentucky’s permanent home-and-away opponents include Florida, Tennessee and Vanderbilt. This upcoming season, the Wildcats will also play Alabama and LSU twice in the regular season.


Kentucky’s league home schedule will include the five aforementioned teams as well as Georgia, Mississippi State, Missouri and Ole Miss. UK’s road matchups will come against Arkansas, Auburn, South Carolina and Texas A&M in addition to Alabama and LSU and the three permanent home-and-home opponents.

Times, dates and television information will be announced at a later date.

UK’s home-and-home slate features five intriguing matchups. The Wildcats will matchup with Alabama for a home-and-home series for the second straight season. The Crimson Tide are the reigning champions of both the regular season and tournament crowns and won both meetings a season ago against Kentucky. The Wildcats are 114-40 all-time against the Tide.

The Wildcats own a 10-game winning streak over Vanderbilt, but it hasn’t been easy for the Cats. UK has had to overcome double-digit deficits in five of those victories. The Wildcats needed to rally from nine back for a 77-74 win at home last season.

Kentucky has played Tennessee more than any other program in the country and owns a 157-75 all-time series record. The visiting teams claimed wins in the two matchups a season ago for the second straight year.

Kentucky will also play Florida twice again next season after splitting against the Gators last year. Florida was 15-10 in 2020-21 but earned an NCAA Tournament berth. UK leads the all-time series by a 105-41 mark.

Further enhancing the competitiveness of the league, 22 of ESPN.com’s Top 100 recruits having signed with SEC schools for the 2021-22 class. The SEC boasts five of ESPN.com’s Top 25 incoming recruiting classes.

In addition to a difficult path through the SEC, UK’s nonconference schedule is filled with bluebloods, marquee home games and exciting road trips for fans.

Season ticket renewals will begin in early August, and all returning season ticket holders from the 2019-20 and 2020-21 seasons will receive information by email when the renewal campaign begins. Fans interested in purchasing new season tickets are encouraged to sign up online for the men’s basketball season ticket lottery.

The Wildcats currently have dates?now set?with?five opponents for the upcoming season.?
?

?Kentucky will take on a challenging schedule with a solid blend of talent and experience.

UK will also gain additional experience with four transfers in forward Oscar Tshiebwe and guards CJ Fredrick, Kellan Grady and Sahvir Wheeler. Combined the four have appeared in 266 collegiate games. Tshiebwe spent the spring semester with the Wildcats and is a former All-Big 12 performer from West Virginia who has 12 career double-doubles. Fredrick, from Iowa, is an All-Big Ten performer who owns a career 46.6% percentage from long range. Grady is a four-time All-Atlantic 10 player who suited up for Davidson and has more than 2,000 career points and a career average of 17.4 points per game. Wheeler is an All-SEC player who led the league in assists per game (7.4) and assist-to-turnover ratio (1.7) at Georgia as a sophomore.

Production wise, it will also be among the most prolific returning teams of the Calipari era. Kentucky will return 42.1% of its minutes, 41.9% of its scoring, 39.0% of the rebounds, 42.4% of the assists and 60.6% of the 3-pointers from a season ago. For comparison, the only two Calipari-coached Kentucky teams that returned more minutes and more points (in terms of percentages) than the 2021-22 team is slated to return were the 2011-12 national championship squad and the 2014-15 Final Four team that started the season 38-0.

‘It Seemed Like an Atomic Bomb’: Surveying the Bootleg Fire’s Devastation

Wed Aug 4 , 2021
BEATTY, Ore. — Marc Valens washed his hands in the rubble of what was when his household, in the bowl the place he employed to make salad. There was some thing almost usual about it all: the clink and clank of lids and pots as he stood at the still-intact […] 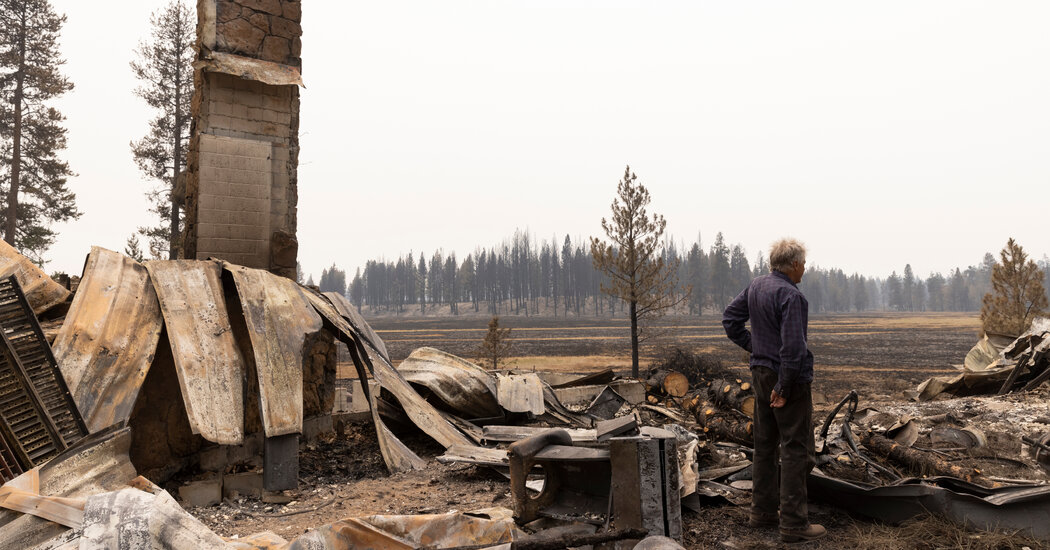